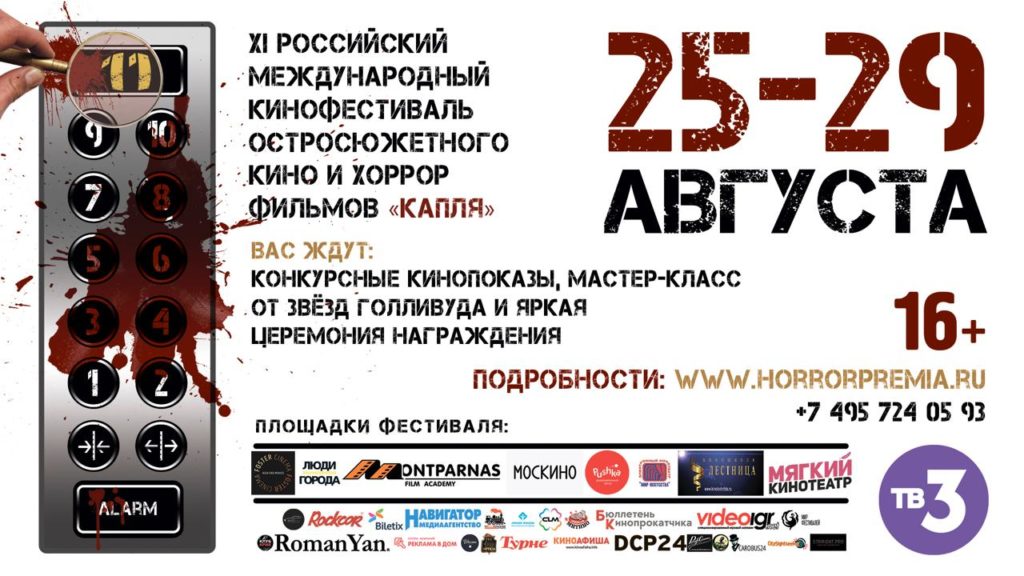 On 25-29 August, Moscow will host the Russian International Film Festival of action and horror movies «Kaplya». A series of events will be presented by «Live Entertainment» production company for the 11th time. The film festival is a major international event and is supported by the World Union of Fantasy and Action Film Festivals. The Russian Ministry of Culture recognizes the festival as an international movie event.

Following the award program, competition films in detective, fiction, and thriller genres will be screened non-stop from 25 to 28 August 2021 in the cinema “Pushka» and «Myagkij Kinoteatr» as well as in MosKino theatre “Polet” and online cinema “Mir Iskusstva”. The audience will be able to see the best motion pictures sorted by the festival’s organizing committee during the year. The competition program includes both the works of famous directors as well as those by newcomers. Applications were received from all over the world so that audience could experience all the features of the various imaginative views of the genre of action and horror movies. Along with the award statuette, diploma, and valuable prizes, the winner of the competition will also receive a certificate for the television rental of the film.

Aside from the stars present at the festival, guests of past years Eric Roberts, John Cassir, Jodel Ferland, Lin Shaye, Mick Garris, Lisle Alers, and many others will deliver videos of their welcome speeches.

The festival guests will present a star master class and Q&A session on 28 August at 18:00 in Hollywood Film Academy «Montparnasse» in the “People of the city” production centre.

On 29 August, the ceremony for awarding the film festival winners will be held at the same time in the VIP lounge cinema “Foster Cinema” in the Art Centre on Frunze embankment. The festival will bring together top action and thriller filmmakers as well as leading figures from the film world on one stage. Ceremony headliners — “Famos” band (Serbia) and “Louis & Mariel” rock band (Russia, Australia). The show will feature Yordi Matos, Alexander Savin, Sasha Chugunova, African Drum&Dance Show, as well as the star children, participants of top projects such as «The Voice», «Children’s Eurovision» and many others.

All fans of the genre are very welcome to attend! Take a chance to get your personal horror!

Buy tickets from 1 August in the ticket offices of the festival.

Accreditation is issued only to representatives of the official media and strictly based on a confirmed publication of the announcement.